Way back early the new year, I had a long time friend and her husband asked if I would make a quilt for her brother as wedding gift. I was super excited to help out, and directed them towards several patterns that I would like to make and let them choose what would suit her brother the best.
They picked the Bento Box pattern by Tracey Brookshier.
Then one evening while I was working they met me at the quilt store where I work and I let them loose to pick fabric. My only directions were 21 prints to make half the blocks, and we would choose a contrasting colour to make the other half.

Chaos ensued.
They came back with flannels, cotton prints and batiks. Sure mixing cotton and batiks isn't unheard of, but flannel and batik together sounds like a recipe for a quilting disaster.


Most of the fabrics were chosen because they represented something the bride and groom like.
Santa Ornaments - the bride loves Christmas
Wine, Beer, Cigars - the couple enjoys socializing with friends and family
Beavers - they are Canadian
Hunting - hunters, as the groom hunts and dancing bears - they met through dance
Woodgrain - the groom lays hardwood flooring for living
Hearts - the quilt is a wedding gift, it only seems right to throw some hearts in the mix
Peeps - family joke about the marshmallow easter candy
Bandaids - the groom is known to always have bandaids around
Music - music is a big part of their lives, the groom sings in an a cappella group

A few of the other fabrics were picked simply because they were pretty, and a few fabrics were swapped to try and make the slightly wild colour palette more cohesive.

Lastly we picked a contrast fabric that would be in all the blocks. A straight solid didn't do the trick, so we picked Tonga Batik Blender in Java.

To manage the differences in fabrics I starched everything quilt heavily with Mary Ellen's Best Press before cutting and sewing. I pre-washed all the flannel, and it still didn't really get along with the batiks, but I made it work.

Here are few of my favourite blocks. The hunting and santa fabric was fussy cut and it was perfect that most of it worked into 2.5 inch squares.


I had my friend come over once all the blocks were squared up and we played with the layout. We tried keeping the 4 patch blocks as pairs, and that didn't feel quite right, so we mixed and matched and came up with the final layout. 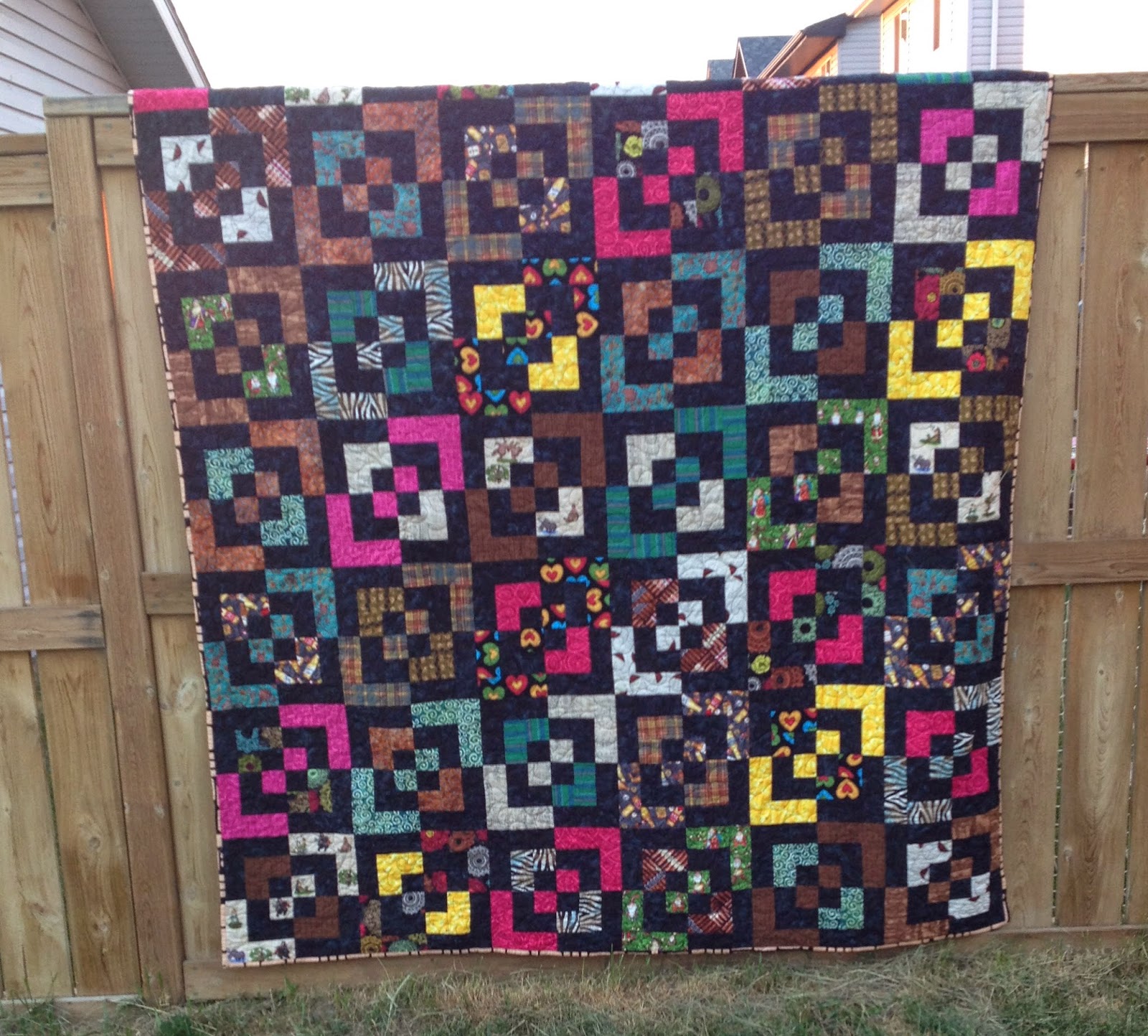 My friends requested a hashtag on the quilt. I thought no problem, we can make the focal point of the back. It was done using raw edge applique in Kona Valentine to match the pinks used on the front of the quilt. 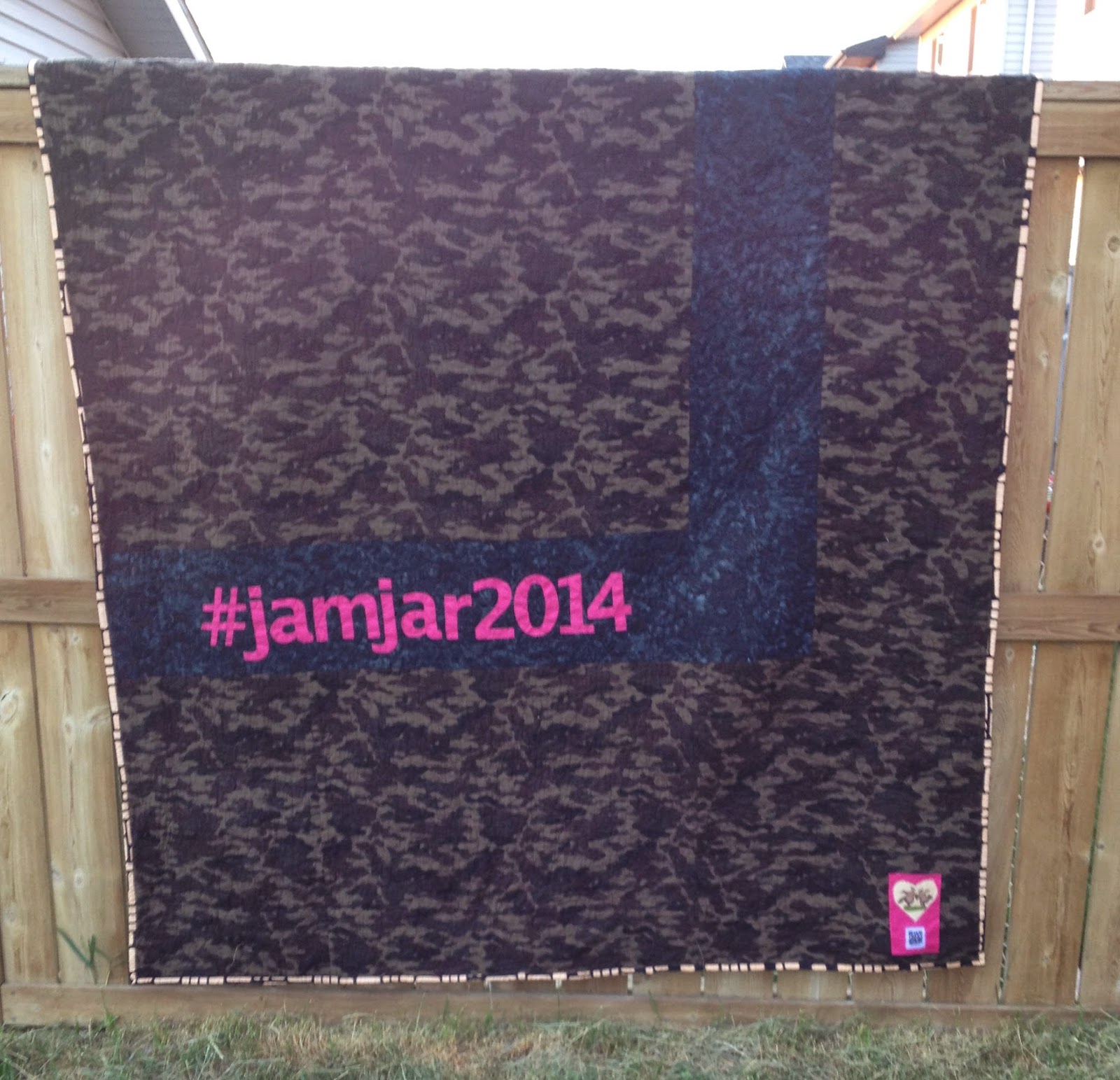 I quilted it on an APQS Lucey Longarm with the Sparrow Studioz & My Sewing Room rental program in Calgary. I used a pantograph called Happy Times and Glide-Tec polyester thread, black on the top and dark grey on the back. This was my first time longarming a quilt and I doubt that I will be able to go back to finishing big ones on my domestic machine. I think the pantograph worked great with the camo print used on the back and the scale was great with the size of the blocks on the front. 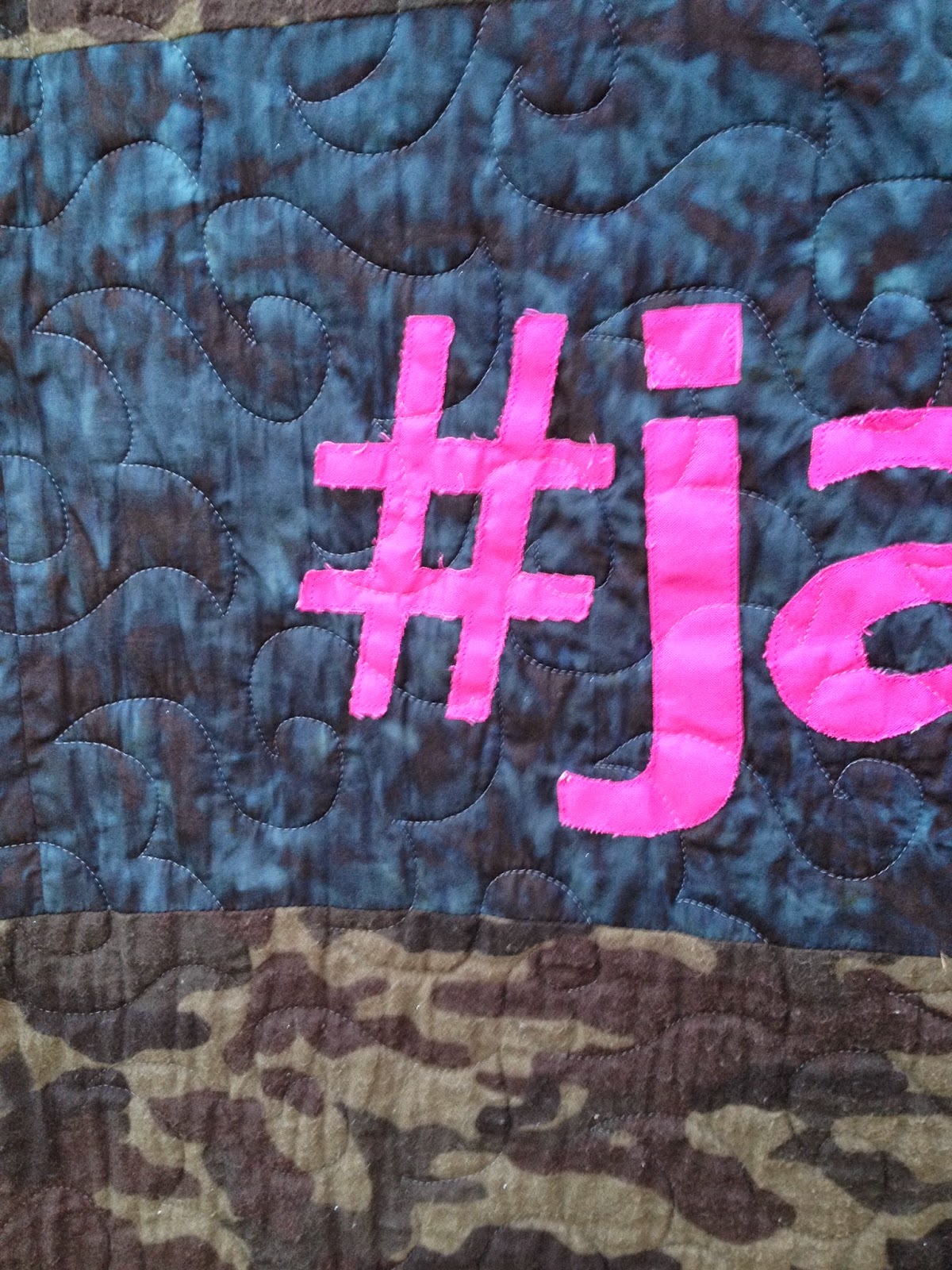 Once done on the longarm, it was binding time. I had saved the bandaid fabric just for this. I love stripey bindings, and as I suspected, the bandaids look like a funky stripe when reduced down to a 1/4 inch. Binding was attached by hand to the front and hand stitched down on the back. 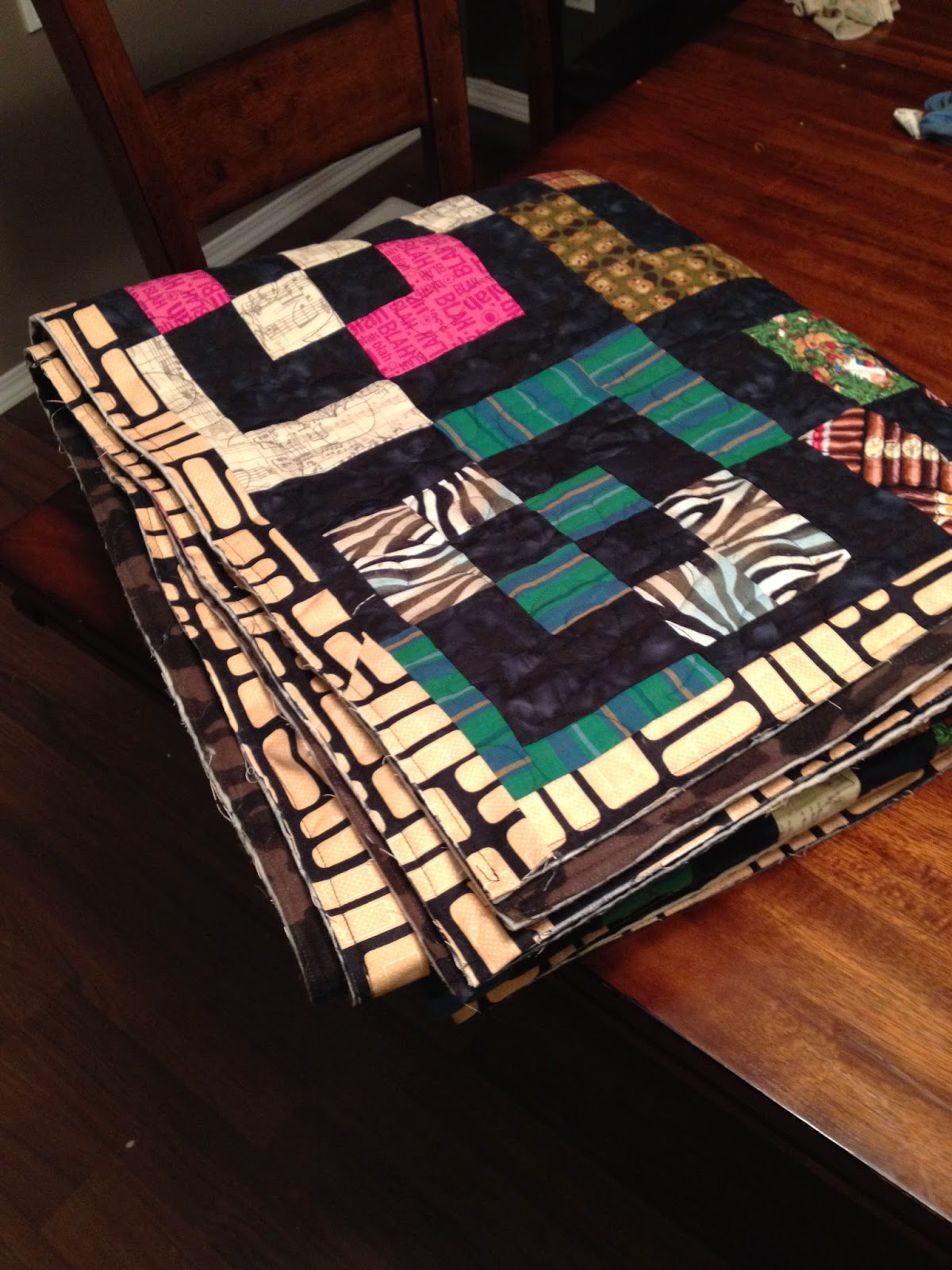 The last touch is a personalized label, as every quilt should have. With a sew-in QR code from stkr.it which my friends will use to customized their message for the bride and groom. 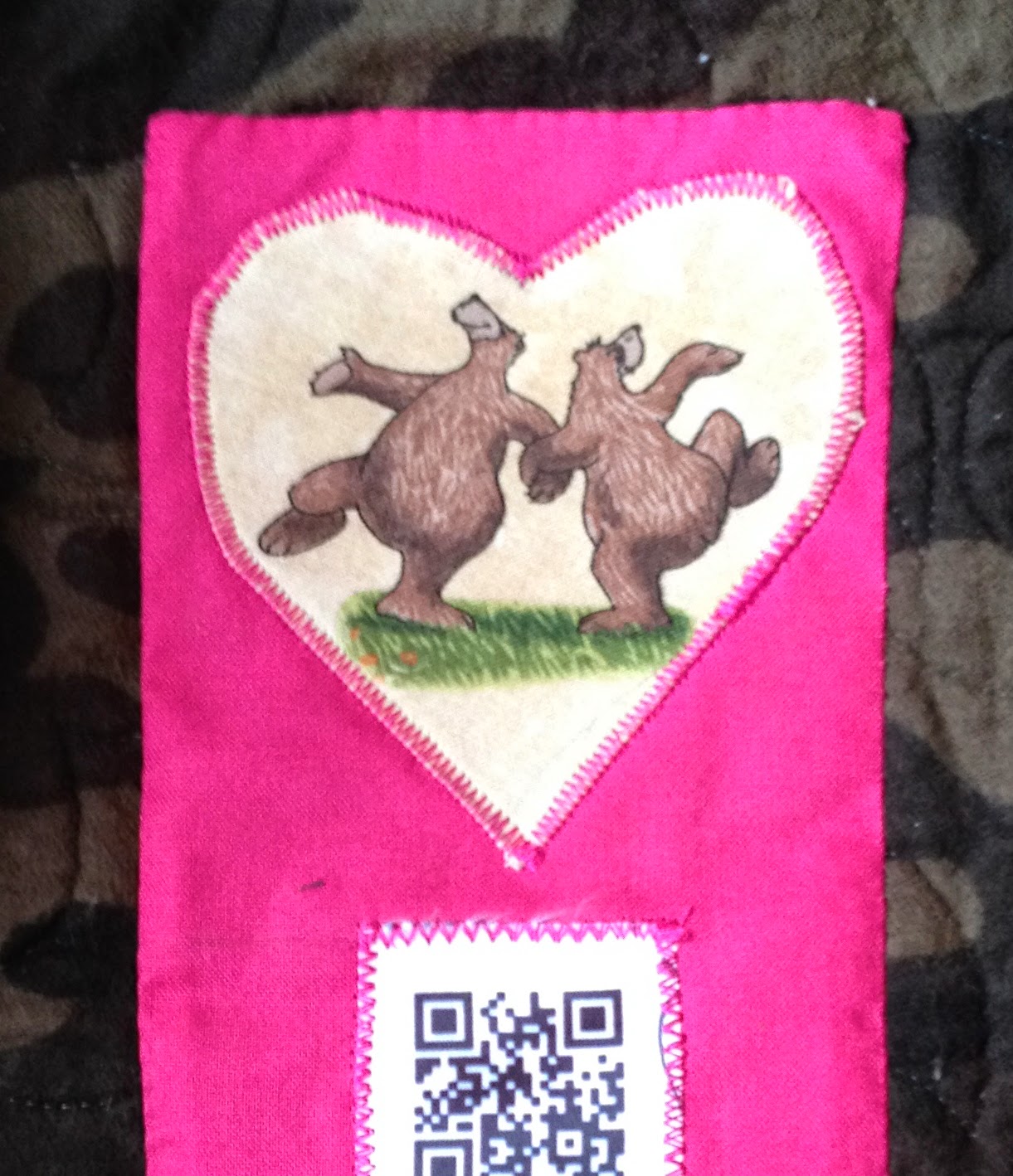 I passed the quilt off to my friends earlier this week, and this morning we had brunch with the bride and groom and presented the gift, just a few days before their big day. 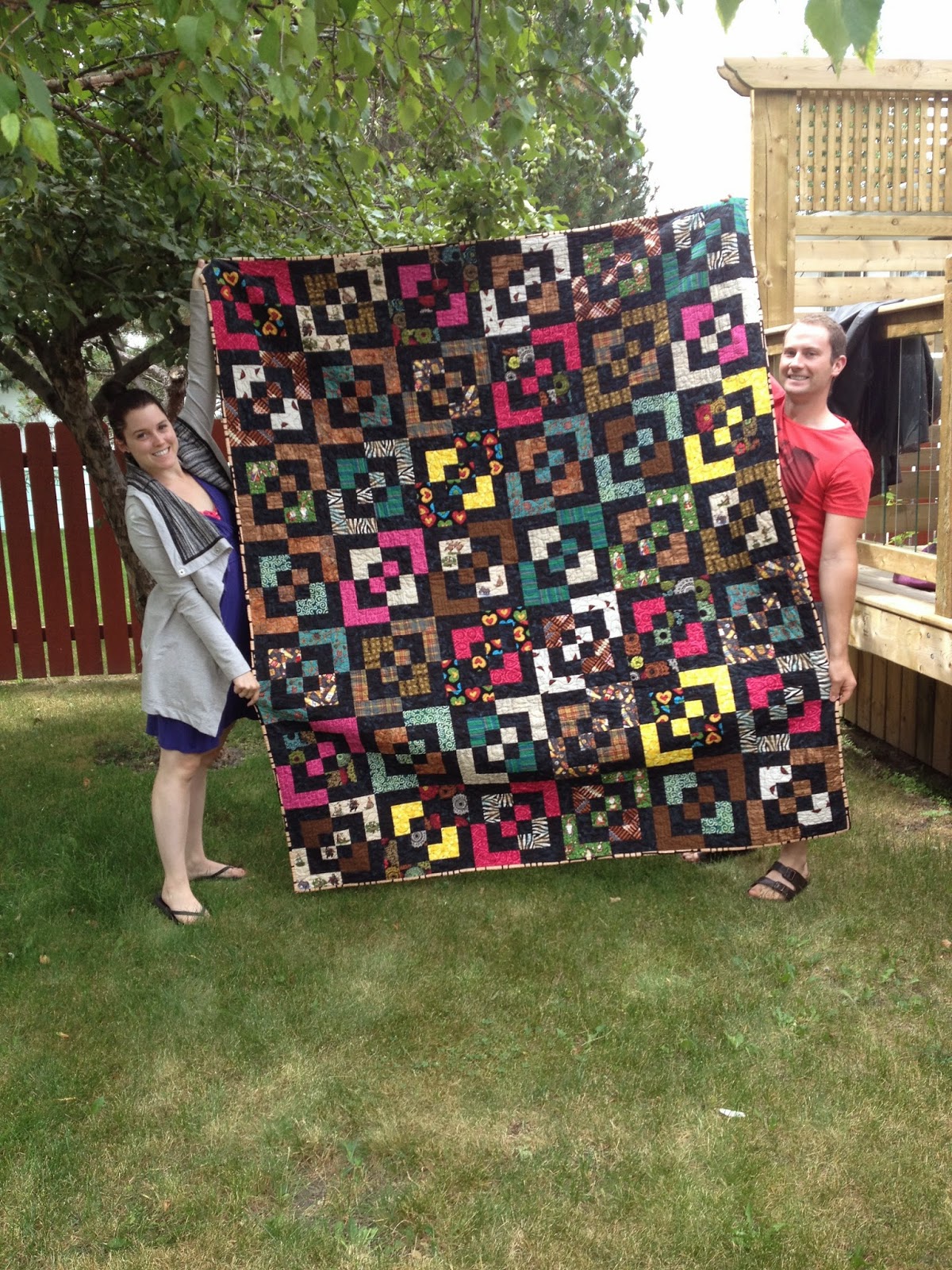 Everyone was thrilled with the results and I am so happy for couple and their wedding next week. It was great to be asked to make this for them. 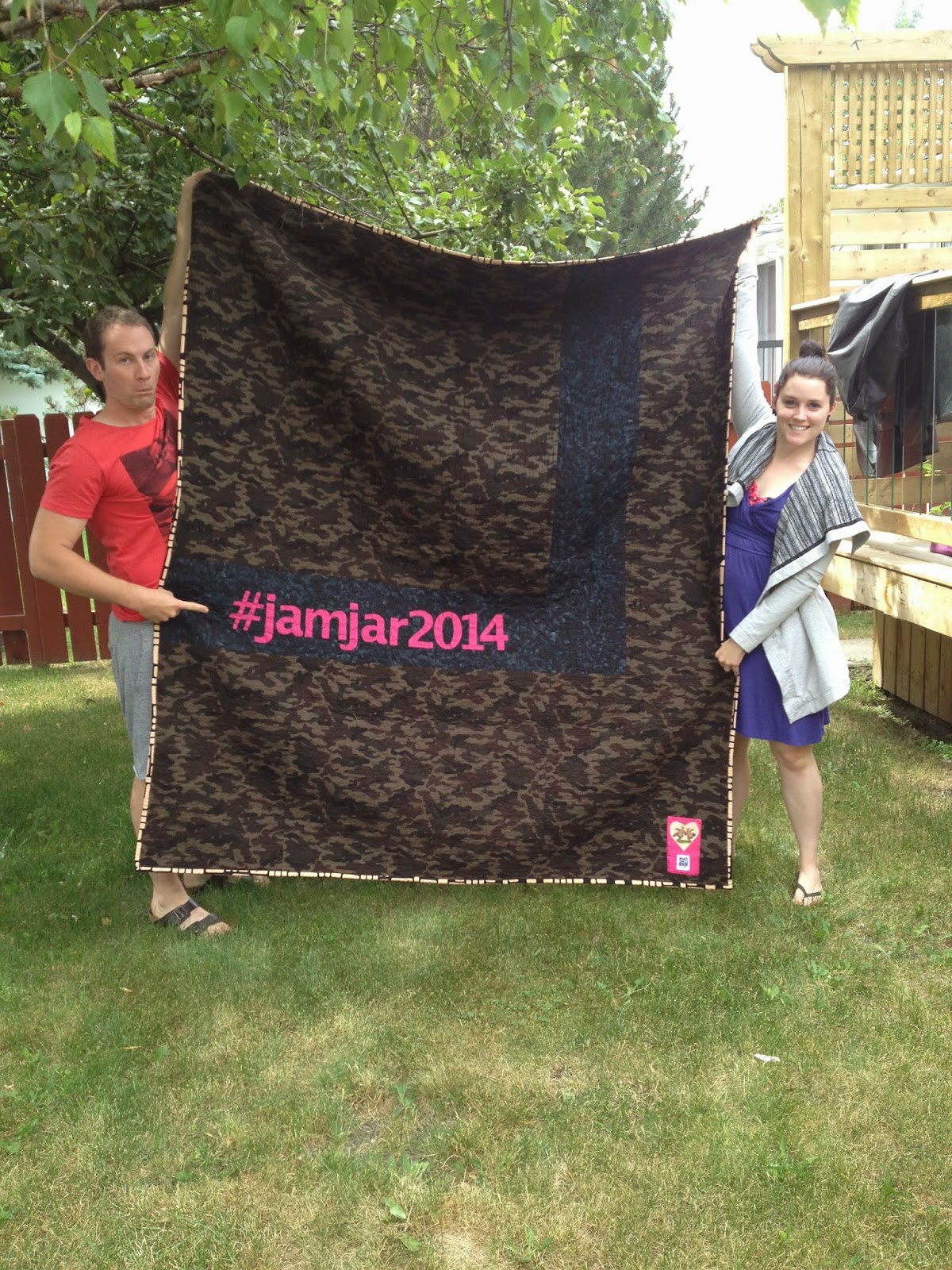 And now for details.

Quilt Stats
Pattern: Bento Box by Tracey Brookshier
Size: 71"x83" (I only lost an inch in seam allowances and trimming from what it was supposed to finish at)
Piecing: Done with 50wt Presencia thread in black on my Grandma's Husqvarna Viking
Quilting: On a rental APQS Lucey Longarm with Glide-Tec thread
Batting: Quilter's Dream Select
Binding: 2.5 inch double fold binding, machine attached to the front and handstitched to the back using  50wt Presencia thread.
Started: Fabric picked in late February 2014, started sewing in March, took long breaks and made other things in between. Quilted in June. Bound in July during a heat wave. I should not hand bind big quilts in heat waves. Finshed a couple weeks before the wedding.
Notes: I am not generally a fan of scrappy quilts. I was slightly horrified by my friend's fabric choices and was quite worried that it was going to look terrible when it was all done. I think our choice of contrast fabric saved it. The Java batik played so nicely with all the other colours and kept them from actually touching. As I started making the blocks I became a bigger and bigger fan of what was happening and knew that it was going to be perfect for the couple. I had a really hard time not sharing more photos along the way. I sent many photos to my friends as I went through the process and it was so nice to keep them involved with layout process. This quilt was commissioned and the arrangement we had was that my friends would buy all the supplies and cover some of my time. I think that is a good  system and I will use it again if I am asked to make another quilt.

Finally, I wish #jamjar all the best as a married couple. So excited to be attend the event next weekend.

Oh, and I am totally linking this up with Thank Goodness It's Finished Friday!