Starting the year off by finishing a quilt is a great feeling and I have been feeling super motivated in the sewing room. I spent some time on the weekend doing some cleaning and organizing. I put some nails in the studs of the unfinished walls to hang my rulers, and hung a small cabinet I had just above my ironing board so that I have a place to keep my iron where it won't get pulled on by little hands or be in the way on the cutting table (which is where it normally lives). I found a small set of 3 drawers and moved fabric bits for current project into 2 of the drawers and the third is filled with thread and extra pins and extra blades for my rotary cutter. In the process of doing this I also reorganized and stashed GeoDad's tools into a small cabinet and put all my work stuff for Discovery toys in cabinet. Then I had had enough cleaning and wanted to sew again, so the desk didn't actually get cleaned.
So in between cleaning and playing with kiddos and work, I also made a couple things from start to finish. I made 4 more diaper covers for LB, as he has outgrown the ones I made in the spring (see info here). I made 10 of the medium size and took weeks and weeks because I was slow with having to sew at the dining room table. Getting 4 done in a week feels good, I think 4-6 more will be enough to get us through 2 days before I need to wash them. Lastly, I took a break from basting white on white hexies when I saw that The HEXIE Blog was hosting a Block of the Month (BOM). Since I have totally caught the hexie bug and I would like to do something as a quicker than my queen sized hexagon quilt once in a while I thought I would dig in my stash and make the first block. The navy is something I got at the awesome fabric sale last spring in Red Deer, where everything was $1/m and proceeds were going to charity. I laid it out on some Micheal Miller Fairy Frost in Silver which I have saved for another project, but I really like it as the background for the snowflake. 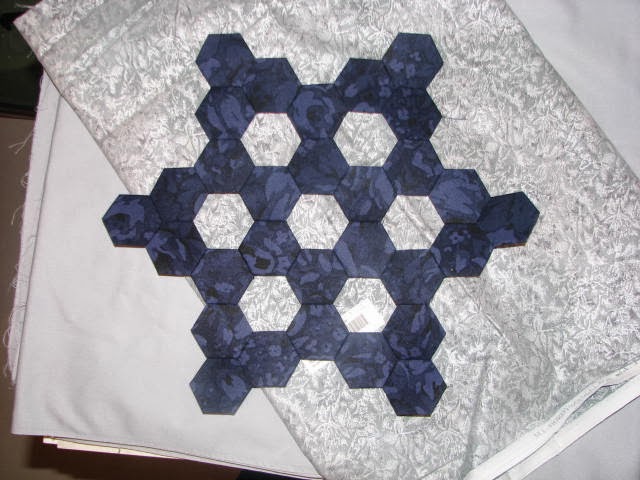 I have basted more of the white on white hexagons and the approximate total is 1300 (unless I have misplaced some, which is entirely possible at this point because it is a mess in the cabinet where I keep the finished ones).

Linking up to Freshly Pieced.
Thanks for stopping by to have a look.
GeoMama