First off I would love to say Congrats to my cousin C and his new wife who were married shortly after the New Year. I was unable to attend the celebration but wanted to make something special for them.

C plays electric guitar and his wife plays piano. I found paper pieced patterns for both instruments from Soma Archaya at www.whimsandfancies.com . They were perfect and I was eager to have another paper pieced challenge.

The blocks came together fairly quickly before Christmas and then I stalled out when it came time to quilt them and assemble into pillows.

The guitar frets were satin stitched with an ivory coloured Isacord thread and the strings stitched with black and silver metallic Sulky thread. 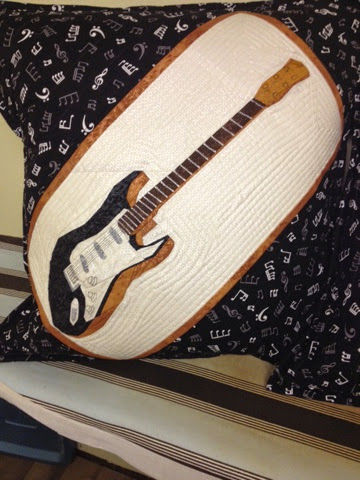 Around each instrument I echo quilted at about 1/4 inch spacing with the ivory Isacord. In the border, simple straight outlines with black Presencia thread. 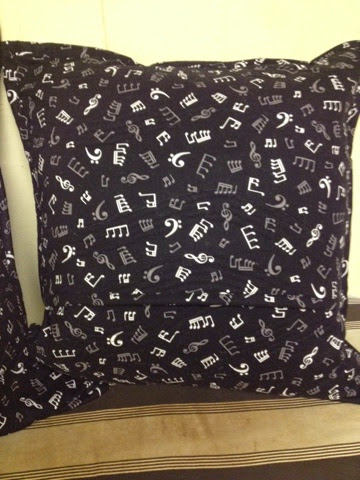 The pillows backs are simple envelope style which were quilted with groups of 5 wavy lines to represent a musical score. 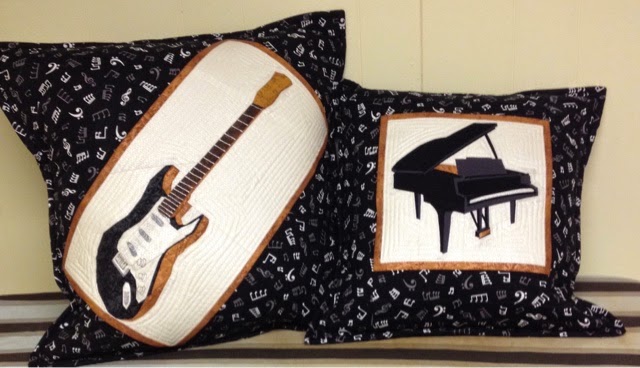 I had planned to make the pillows the same size but I didn't want to change the size of the blocks out of fear of scaling all the tiny little pieces and not having them go together properly. The guitars dimensions didn't work great to border on a square pillow which is why I set it on point.

It felt great to put the final stitches in the binding last night and they will be mailed to the newlyweds tomorrow.