I Married GeoDad! Part 1: The Flowers

Just under 3 weeks ago GeoDad and finally got married. We have been planning to do so since before Monkey was born and she turns 4 next month. We had the perfect day picked:

March 14, 2015 - Pi Day
GeoDad officially proposed in October, 2013 and we sort of started the planning stages of the wedding, but mostly put off any big planning until after we bought our new house last summer. Once the venue, a local hall, was picked and I had my dress I started to think about flowers. I knew I would be having our photos done outside no matter the weather. (GeoDad and I have parkas, I was willing to wear them if needed). I didn't really want to pay a premium for fresh flowers in the middle of winter in Alberta just to have them wilt in the cold and I like making things myself.

I set off online searching through tutorials on fabric flowers, I had a plan and no one was going to stop me. Initially I was picturing something elaborate with silk, organza, felt and fabric and had I not liked my first couple flowers so much I may have gone that direction.
Anyway, I made a single trial flower then spent a night at my Mom's having a wedding craft night. We managed to make about 30 flowers between the 6 of us and I am sure they all thought I was crazy. 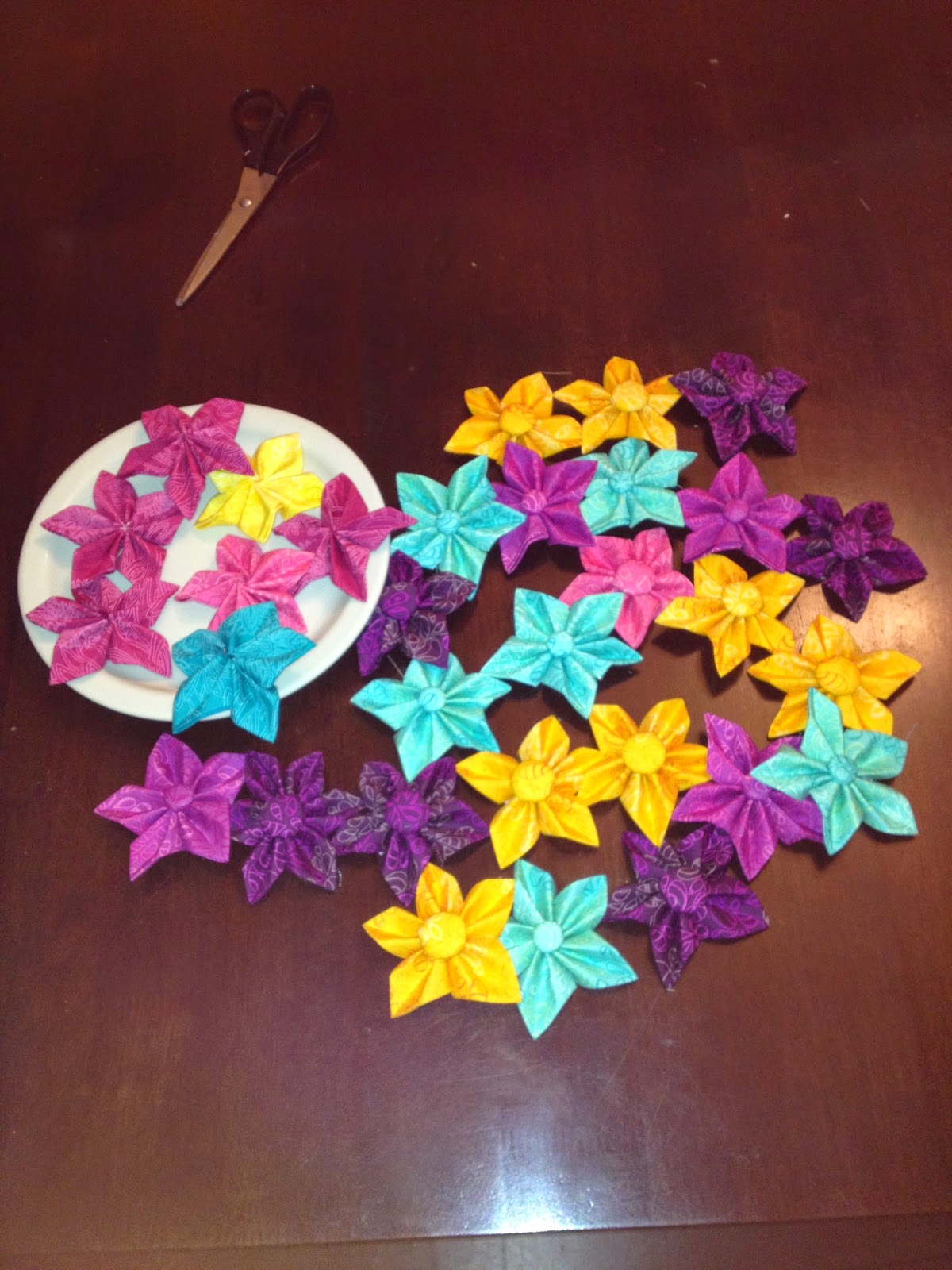 But I am crazy and very determined. I loved how adorable the covered button is as the flower centre and prepping to sew these was simple. Starch fabric, cut rectangles, fold and sew. After our first craft night I started working on them while I watched TV. By mid January I had 100 made. 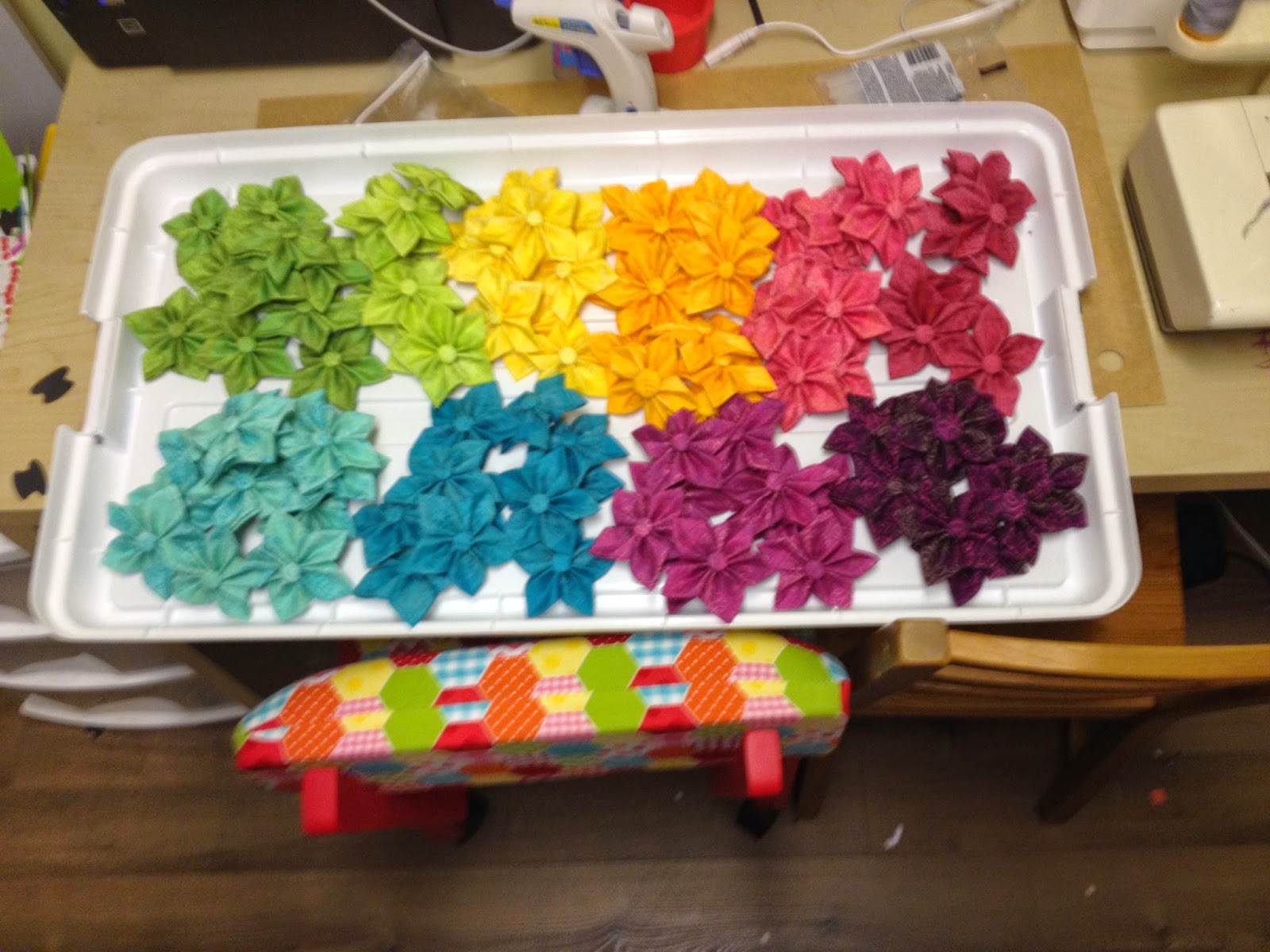 It looked like tons of flowers and I was hoping I was done. And then I tried an initial layout on the styrofoam I was planning on using a core of the bouquet. 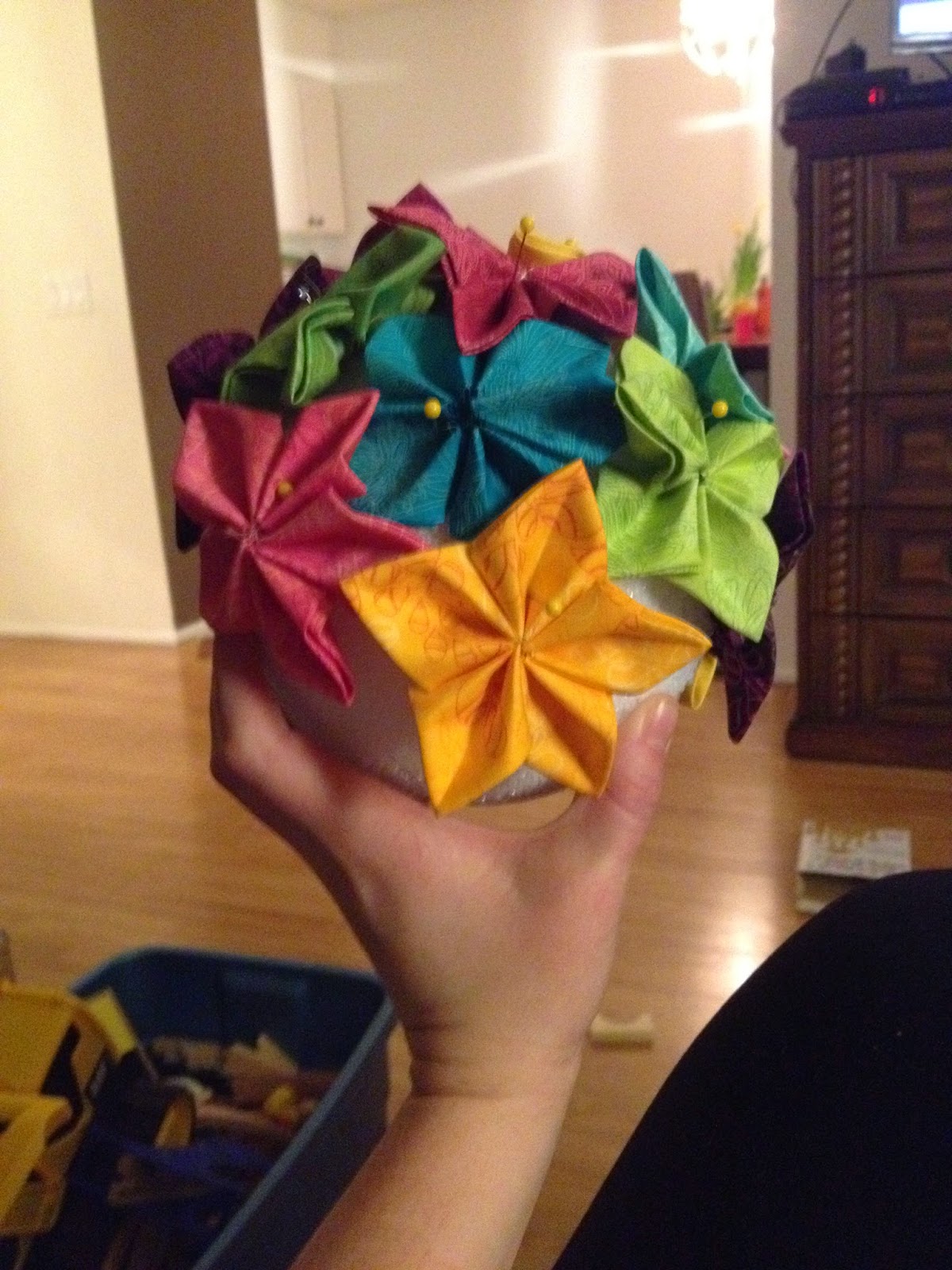 16 flowers barely covered half of it. And I had 5 bouquets to make in total and boutonnieres. So I kept sewing and ordered more brads/buttons to cover and made somewhere between 200 and 230 flowers. As the wedding approached I started taking half an hour in the mornings before work to hot glue bouquets together. But by the time the big day rolled around I was done.

Besides the bouquets and boutonnieres, I also made attached flowers to bobby pins for myself and the bridesmaids to wear in our hair. (Mine were white) and a headband for Monkey.

The bouquet looked great against my white dress.
And with the tuxedos and bridemaids dresses.


We had a fabulous day and all the bridesmaids get to keep their bouquet forever. I am so happy that I kept going with my crazy plan for flowers. I will write another post or two about Monkey's flower girl dress and the ring pillow I made. (Maybe I will sneak in some of a shot of GeoDad and I doing something sappy, like kissing).

Hope you enjoyed seeing these and I look forward to sharing a bit more soon.
Mrs. Walker - GeoMama